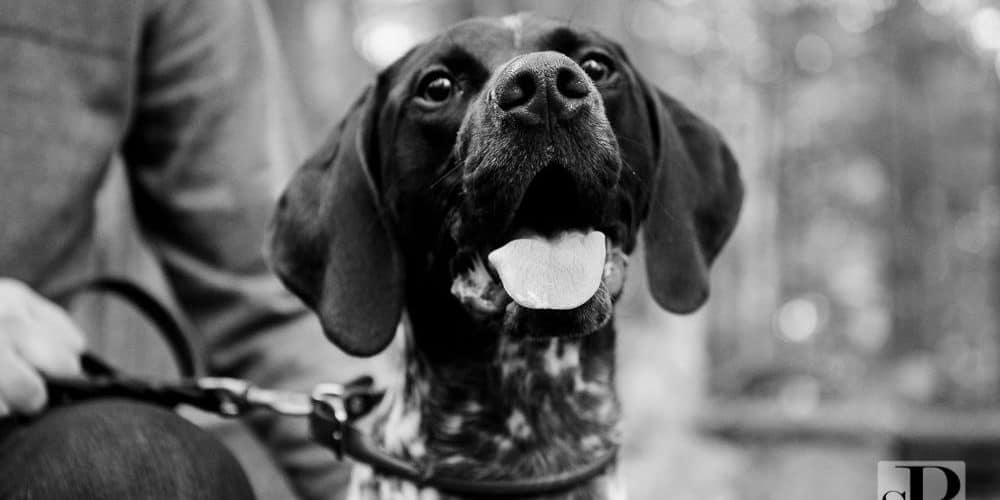 Archer & Gus: Archer (right) is 5 years old and Gus (left) is 3 years old. Both are German Shorthaired Pointers loved by Rachael. Archer spends his days chasing squirrels and frolicking through the forest in pursuit of all things smelly. When not suffering from extreme zoomies and/or treat withdraws, Archer can be found snuggled in his Snoozer Cozy Cave recharging for his next adventure. Gus is the ultimate teddy bear and is always game for a snuggle and a snack. He has never encountered a food item he will not eat, and outruns 10/10 dogs at the park. When not drowning in his own drool at mealtime and/or causing a general disturbance, Gus can be found curled in a tiny ball in his favorite sun spot on the couch.

Breed Facts: German Shorthaired Pointers were bred to be the most versatile of all hunting breeds. The breed in general is loyal, smart, and bond strongly to family members.

Arya & Loki: Arya is a 3 year old domestic long haired princess and Loki is a 5 year old domestic short haired black hurricane loved by Trish. Arya is known for her cuteness and willingness to beat up brother Loki on a seconds’ notice. The cute smudge on her nose acts as a distraction to her humans, as they cannot see past it’s uniqueness to scold her appropriately. Loki came by his name easily when he was adopted– he was wild and crazy. Since Arya has whipped him into shape, he has since settled down but still sees himself as a king among commoners.

Breed Facts: There are over 500 million breeds of domestic long/short haired cats in the world. A group of cats is called a clowder, the heaviest domestic cat on record weighs 46lbs, and cats have been loved by humans as pets for over 10,000 years.

Belle, Jacks, & Lewis: An absolute dream team all loved and adored by Linda and her daughters. Belle enjoys long grooming sessions in front of her favorite spot on the window sill. She puts a spell on all those who gaze upon her beauty…not only is she a pretty face, but she has an even, affectionate temperament making her ‘the whole package’. Jacks is a handsome Bouvier who enjoys keeping his yard clear of critters and birdies. Occasionally known to bury a bone or two in the yard and forget where he put them– he then calls for Linda to dig them up on his behalf. Lewis is a little Blue Heeler whipper snapper full of puppy teeth and energy bursts. Hasn’t quite figured out that he can’t herd Belle, and that cats don’t particularly enjoy puppy tackles. Lewis enjoys chewing anything he can get his mouth on, taking short inconsistent naps, and engaging in the zoomies at all hours of the night.

Breed Facts: The Bouvier is a herding dog which was originally bred and developed in Belgium. The breed has been known best as an excellent cattle herder, which is the meaning of the French word bouvier. The Blue Heeler, or Australian Cattle Dog, was developed in Queenland, Australia by George Elliot in 1840. Elliot was dedicated to producing a breed that was an excellent working dog, and crossed Dingos with Collie mixes to create the Blue Heeler.

Hank: A burly stud muffin ready to give kisses on command, wants you to know that he is loved dearly by Jill. Hank is a 4 year-old Boxer who is more photogenic than most people. Ready to take consecutive naps on a moments notice, or run with ponies at the barn for hours on end, he only wants to do what you want to do. He’s like the perfect boyfriend. But don’t ask him to share any snacks though, because he’s already eaten them. Sorry not sorry.

Breed Fact: Boxers were developed in Germany in the 19th century, initially as bull baiting dogs and later as butcher’s helpers, controlling cattle in slaughterhouses. Boxers were not imported to the United States until after World War I. After 1940 the breed rose to become among the most popular in America.

Free Shipping on orders over $75 with coupon code: FREESHIPPING75 Dismiss